This post is part of my Game Math Series.

Source files are on GitHub

Previously, I talked about numeric springing and provided some examples.

I have been saving up miscellaneous topics I would like to discuss about numeric springing, and now I have enough to write another post. Here are the topics:

Recall the differential equation for a damped spring:

And the equations for simulating such system obtained by the implicit Euler method:

on most use cases are far from the breaking values. You would almost never use an overdamped spring, so

is usually kept under 1. Even if

is set to 1 (critically damped spring),

can be safely set up to

(5Hz), which is a very fast oscillation you probably would never use on anything.

So, if your choice of

Numeric springing and tweening (usually used with the famous Robert Penner’s easing equations) might seem very similar at first, as they are both techniques to procedurally animate a numeric value towards a target value; however, they are actually fundamentally different. Tweening requires a pre-determined duration; numeric springing, on the other hand, does not have such requirement: numeric springing provides a simulation that goes on indefinitely. If you were to interrupt a procedural numeric animation and give it a new target value, numeric springing would handle this gracefully and the animation would still look very natural and smooth; it is a non-trivial task to interrupt a tweened animation, set up a new tween animation towards the new target value, and prevent the animation from looking visually jarring.

Don’t get me wrong. I’m not saying numeric springing is absolutely superior over tweening. They both have their uses. If your target value can change dynamically and you still want your animation to look nice, use numeric springing. If your animation has a fixed duration with no interruption, then tweening seems to be a better choice; in addition, there are a lot of different easing equations you can choose from that look visually interesting and don’t necessarily have a springy feel (e.g. sine, circ, bounce, slow-mo).

Previously, I proposed a parameterization for numeric springing that consisted of 3 parameters: the oscillation frequency

in Hz, and the fraction of oscillation magnitude reduced

over a specific duration

I have received various feedback from forum comments, private messages, friends, and colleagues. The most suggested alternative parameterization was the half-life parameterization, i.e. you specify the duration when the oscillation magnitude is reduced by 50%. So here I’ll show you how to derive

to plug into numeric springing simulations, based on a given half-life.

(lambda) to denote half-life. And yes, it is the same symbol from both Chemistry and the game.

As previously discussed, the curve representing the oscillation magnitude decreases exponentially with this curve:

By definition, half-life is the duration of reduction by 50%:

Once we decide the desired

And here’s a sample implementation:

(2Hz). You can see that the oscillation magnitude is reduced by 50% every half second, i.e. 25% every second. 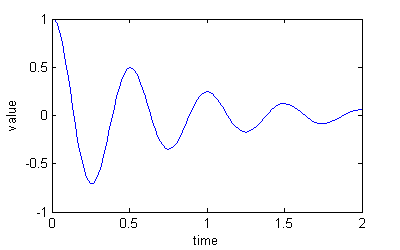 I hope this post has given you a better understanding of various aspects and applications of numeric springing.

This site uses Akismet to reduce spam. Learn how your comment data is processed.